Zurich is the epicentre of Switzerland

The city of 1.9-million is culturally vibrant, efficiently run and attractively set at the north end of Lake Zurich in northern Switzerland.

Whether it’s the Summer Street Parade in August that draws upwards of one million people, the uber-hip Zurich West area replete with discos and restaurants or the city’s renowned financial district, Zurich long ago became the country’s poster child.

The many cultural, economic and social benefits of Zurich and Swiss life more broadly have made it one of the world’s most liveable cities.

A great deal of Zurich’s ancient centre, with its winding lanes and tall church steeples, has been affectionately preserved. However, Zurich has also wholeheartedly embraced contemporary trends, with the conversion of old factories into cultural centres and creative new living spaces.

Data centres are an adjunct part of that movement. Outside the city’s ancient centre with its winding lanes and tall church steeples, are a lesser known but steadily growing number of gleaming new buildings, in the canton of Zurich.

Zurich has become an attractive locale for data centre operators and organisations looking to host data and equipment given the favourable reputation of its banking and financial services sector and its legally-protected tradition of security and confidentiality.

Business taxes are relatively low by European standards, and Switzerland is known for its political stability. It’s also home to a highly educated, multilingual workforce which means there’s an abundance of trained technology specialists.

Zurich is centrally located in Europe which boosts the case for colocation. The Zurich central station, for example, is one of Europe's main railway intersections, with over 1,900 connections every day, which makes colocation in Zurich ideal for enterprises with multiple European offices given the distance between locations.

The accessibility, high quality of life, well-educated people, support of innovative activities in addition to the concentration of Fortune 500 companies in Switzerland have made it an increasingly popular place for early-stage companies to set up shop. According to the Patent Cooperation Treaty (PCT), Switzerland ranks sixth worldwide (out of 148 countries) for ICT patents concerning registered patents per capita.

A steady inflow of data centre investment over the past seven years has been the result. Data centres, though they’re a less-heralded part of the Swiss economy, now dot the Zurich, Bern and Basel business landscape. The country hosts an estimated 25% of European data volume, according to a recent Credit Suisse study.

Zurich will be an attractive location for data centre operators and customers alike for the foreseeable future. Digitisation, for example, is a hot topic with enterprises in Switzerland. Consultancy Ernst and Young (EY) has said that Swiss companies are most optimistic about the prospects for digitisation as it relates to their business.

This attitude is a potential boon for Zurich data centres as is a higher propensity for outsourcing among enterprises with operations in the country. As more security concerns are addressed, additional workloads are expected to be outsourced by organisations. Whether it’s start-up businesses that want to spin up servers for testing purposes or large enterprises looking to colocate customer data, data centers will be an increasingly important part of the Zurich and Swiss landscape.

It’s ideal for customers looking for energy efficiency and green energy as it employs the latest energy-saving measures. It’s connected to a city water cooling system with a backup chilled water system. Also, the site operates on renewable energy sources.

Our Zurich colocation data centre has over 2,500 sq. metres of secure, resilient colocation space. It’s also compliant with important international standards, such as ISO 27001 for security and ISO 14001 for energy efficiency.

Our data centre services portfolio, such as the Remote Hands technical support service, can be used to support your company’s presence in our Zurich data centre.

The Colt DCS team in Zurich is responsible for the entire mechanical and electrical infrastructure at Colt Zurich Data Centre. Management of the data halls, capacity management, security, energy procurement and the programme of planned preventative and corrective maintenance work are handled by Colt DCS. 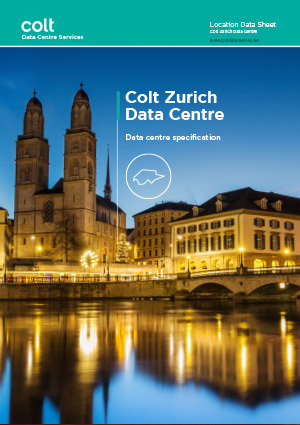 Our Zurich data center is compliant with international standards, such as ISO 27001 for security and ISO 14001 for energy efficiency.

Review full specifications on offer at this location, such as facilities available and on-site connectivity partners.